It was a warm day with little wind, perfect for flying to Orland. My family and I were going to the Disney Cruise. The flight took a while. When we got there I was so excited, but my excitement was soon taken away when mom said we leave in 2 days. The next day when we woke up mom and dad had a surprise for us. I thought it was a gift and my sister thought the same thing. It wasn’t a gift though, it was 4 tickets to Universal Studios. I was jumping all around. “Mom, when do we leave?” I asked. “Today!” She said happily. When we finally got to Universal Studios I was in a hurry to go to the rides, but mom told me to slow day because we had all day to play. We went on almost every ride. We ate lunch there too. I ate a burger. My favorite part was on the Jurassic part of the park. Those were the coolest rides in the park. When we left I was sad and happy. I was sad for leaving the park, but I was happy to go to the Disney cruise. When we finally got there I saw the ship. It was huge. The rooms inside the ship were even bigger. It had a bunk-bed, a bathroom and a king sized bed. By the time I had finally got ready to go up to the deck mom said it was 9:30. So that’s how my first day at the sea went. The next day when I woke up I went to see if my parents were awake, sure enough they weren’t. What I did to pass the time was use dad’s iPad and went on the balcony. There was a cool breeze outside. Finally after a million years my parents woke up. “Mom, I’m hungry. Let’s go eat breakfast.” I said. She said okay and we’ll be up in a minute. We ate egg free waffles. Next, mom told me that each day at see went on another island. She said today we go to Atlantis. In Atlantis we would go on water rides and eat lunch. First I went on a tube ride. Those are the ones when you go on a raft and slide down. It went through a shark tank. I was terrified for the glass to break. After that I went in a beach pool. That’s a pool that starts off like a beach. I also ate chicken fingers. That was only the left side of the island. The other side is where all the fun happens. They have 4 or 5 rides there and they were huge. The biggest ride goes up too. Then it lands in the lazy river. The lazy river is my favorite part of all water theme parks. The sad part finally came though and we had to go back to the ship. Mom noticed I was sad and said “Lu, you can still play on deck at the ship.” That made me better. The next day we went to the Disney Island. That was the island that Disney owns. We went in the ocean for like an hour trying to catch the fish, but they were impossible to catch. After that we went to eat lunch. I know that I had a burger. After that I saw a floating theme park. Actually it was more like 2 slides on a giant raft in the ocean. I went on it 3 times. At the end of the day I went back to the ship and I was sad. That was my last day at the sea. This was a special trip to me because I know how much my family likes to be together. 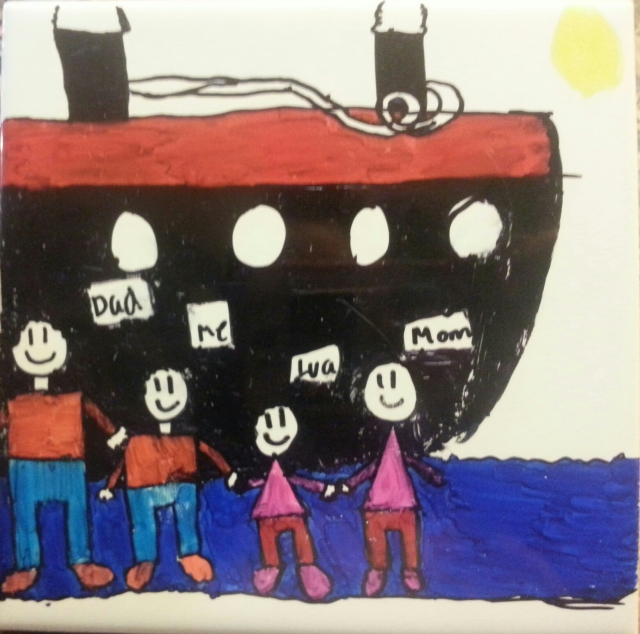